Often for many of us, our bodies are in what I would call a ‘low energy state’, perhaps we don’t know it, we just know ‘something is missing’. We struggle to find meaning. We long for deeper connection. Secretly wish for the recognition of pears. When this isn’t met we turn to a yearning to journey into a fantasy world. To meet “aliens. Time Travelers. and Ghost (Espers).” To quote a certain anime. Can’t this world get a little more interesting?

It’s mid winter. Haruhi is only wearing a tea shirt. But she is not cold. Her body is generating a massive amount of energy. It seems like she has nearly three times more than the others in the group. On the other hand Kozimui (in the middle) is freezing.

Haruhi is not only not cold, but she is having fun. She races ahead. What is it about her life style that allows her to generate this kind of energy?

Sure anime is fiction, but you can tell the creators are often inspired by observations of real events and experiences, because at the end of the day audiences relate to the stuff that feels ‘real’. Pure fantasy is actually less exciting because we can’t relate to it.

What generates Haruhi’s energy, her mainframe? Her willingness to take charge, and gather people, without needing a good ‘reason’? The way she can act without having to think or prepare that much before hand. The way she doesn’t care what people think of her. Probably all of the above.

Goku fights many battles on his own, but he only becomes a Super Saiyan God after gathering power with his friends.

In his battle Goku expresses sadness that he wasn’t able to “achieve this power on his own.” We see this theme of Pride play out many times in the anime series, Dragon Ball Z. By expressing this Goku lets his pride get in the way and his opponent Lord Bills gains the upper hand for a time. I relate to this in my own life, my greatest strength has come from gathering with others, but my pride gets in the way, I’ve found it hard to accept more of this power, even knowing how to get it, for the reason that it’s not ‘my’ power, it comes from the group, a shared power that goes beyond what I can do on my own.

Pride: I’ve got to do it on my own. I’ve got to suffer thought it. I am tough. I don’t need help from anyone. This will make me stronger.

Vageta puts a serious amount of effort into everything he does. He struggles, grunts, and strains. But because of his pride, he always falls behind Goku.  There is a kind of effortlessness to Goku’s power Vegata can’t seem to match no matter how hard he tries.

When Vageta abandons his pride and teams up with Goku, they attain incredible power. Power that goes even further beyond what Goku can attain alone.

“Because they were rivals, it actually makes their fusion more complete.” Old Kai, a wise elder, remarks.

I watched a lot of anime as a teen and young adult (as many do, anime is a surprising success even among adults, it is cathartic, we relate to it, it captures our emotions), something about it just captivated me like nothing else. My conscious life was very much about finding the ‘dream girl’.. but looking back what I didn’t realize was, much of the anime I watched was about a group of characters, coming together, bonding, laughing, going on adventures, all my favorite shows involved groups of characters, sometimes just goofing around, even though I consciously wanted the ‘dream girl’ I had a strong subconscious desire for group bonding, to be with a group of friends or peers. (Well the word subconscious makes it sound like some mysterious part of my brain ‘already knew’ it, and maybe it did, maybe I was afraid to admit what I needed and wanted, because it meant exploring new ways of spending my time, but it’s also true that I wanted and needed a new way of being with people, I needed it, even if I didn’t ‘know’ that i needed it, on any level of my mind.) This was definitely true for me, I can see now much successful anime has this theme, and I wonder that others are drawn to anime by this same desire to be part of a group, a club, etc, even if we often may not even be aware of this yearning, or that it is this that we are yearning for.

Sometime it feels like we are disconnected from our bodies, particularly in the modern technological era. It’s as though our body is some giant humanoid machine, like the ones from the despotic future anime Evangelion. We take orders, fight battles, we forget what we are even fighting for.

Sometimes for mysterious reasons our ‘sync ratio’ seems to be just right, “above 300” to quote Evangelion, and everything goes smoothly. Life just works. This amazing power comes out of seemingly nowhere. A body mind connection.

Other times we find ourselves hopelessly disconnected. The machine just won’t go. We don’t even know why.

The body is the strange thing, almost like an ancient alien technology.

Atuska and Shinji fight in Sync and defeat the enemy. Representing when people are in sync in an act of play, we are connected, as though by a magnetic or energetic field. In Evangelion they call this the AT field. IT takes them training and practice to get there. At first their instinct is to compete and argue, and this makes things worse, they lose the battle, by working together as friends and equals they win the battle.

.hackroots is another fun sci-fi anime. In this anime Haseo and Ovan spend a lot of time in the virtual reality game, “the world.”

When he stops moving Haseo’s (on the right) natural posture is slightly hunched. He struggles to connect to others. His body is not receiving vital energy. He feels dissatisfied and searches for this satisfaction, moving from one thing to the next, and his own vital energy can’t keep up with him. He is in a state of perpetual depletion.

Ovan has a bit of a confident older brother persona. Esoteric and intellectual. Ovan has better posture, but this is maintained with subtle conscious effort. On the surface Ovan seems to have a natural strength, but in realty his vital energy is only a bit stronger than Haseo’s. By creating an appearance of strength Ovan attracts healthy relationships into his life and thus gains some actual strength. But he may not fully be in touch with his inner power either. 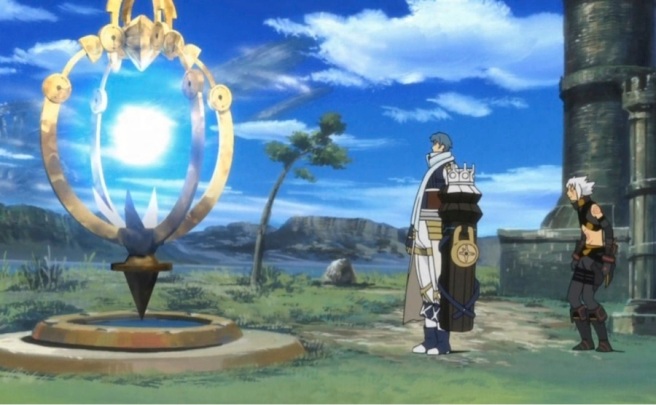 Haseo will yearn for Ovan’s charisma. He may even mimic Ovan’s behavior. But he will only get mixed results. In realty even Ovan doesn’t know what he’s doing, he only seems to. This sets up a dangerous paradigm.

Kaname Chidori is a regular school girl with no military experience. However because she has a healthy life style, good friends, and is in touch with her instinctive body she is able to out wit and defeat a highly skilled combat specialist in their first encounter.

Chidori’s instincts and fully functioning perception allow her to doge bullets on reflex. The specialist on the other hand has years of training, but her body simply can not keep up physically. Chidori herself cannot understand why she is winning. The combat specialist has training in the field, yet she is a victim of abuse and is completely out of touch with the basic instincts of her body. Again these are anime characters, yet i feel like i see this same type of thing in reality, as i watch the anime it reminds me of real life experiences and people.. and the anime makes it fun and easy to identify and remember these phenomena.

The anime refers to certain characters having ‘whispered’ powers. I can’t help but wonder if these powers are a metaphor for the abilities of the instinctive human body when uninhibited by depleted (or stressed) energy. Our human bodies grow old they die. Our organic minds are slow. We are susceptiable to illness and diease. We make silly blunders all the time.

We dream of an age where all this might be changed. Where humans are enhance. A merging of human and mechiene. Some dread it, others yearn for it.

An age of artifical bodies that live forever. Think faster. Feel better. And can communicate telepathically through the net.

The Ghost in the Shell. We feel our inner reality is often hard to express to others. So much remanes unexpressed though present day language. What if one day in the future we could share our deepest thoughts and expreces by synching our minds though some kind of cable or net singnal. Would it bring us closer. Would it bring us too close?

Could this dream of connection be possible in our time. Does the body have some kind of hidden potential making these feats possible without technolgy?

We build our cities but we put the forest in danger. We advance technology, society, knowledge, but it seems at the cost and suppression of our own basic nature. We enrage the spirits within. We turn the forest into our enemy. Gods become demons that go on to harm us as much as we harm them. What is the simple yet power message of Princess Monoke?

Ashataka saves his village from a demon, yet instead of becoming a hero he is cursed where the demon touched him. He did the right thing, yet now he must bare this strange cruel sticky curse mark, possibly for all his life, and is outcast from his village. Already this movie is different and profound. It is a wound that refuses to heal, like some in my life. At first one doesn’t understand why.

But then we learn to cope. We learn to use the curse to our advantage in the ways that we can. Ashitakas curse is a good metaphor for the weirdness and relentless itch of mircrospic decease, things that effect us on the cellular level, or even just fear and negative thoughts, all the little waves and energetic pulses that can compile and bring us down, or lift us up.

Society succeeds in conquering human nature in the part of the movie when Lady Eboshi kills the Forest Spirit. This moment in the movie is really profound for me, because Eboshi  actually kills a god of goodness and nature, thinks she’s accomplished something and it certinatly was hard to do, yet she doesn’t realize she’s actually killed the source of life she and her people depend on. In modern times we have conquered the earth with our current version of society, polluting it, yet our industrial and competitive based way of life does not harness the true power of nature and the human and animal community. We are getting in our own way by not trusting nature, and other people as equals, not trusting our own nature and the creative playful self. They could have easily said the forst spirit survives and get’s payback, but it doesn’t, much is not redeemed, and that is more true to what happens in our world.

We long for a return to natural harmony.

14 thoughts on “Why Anime reveals our desire for Group Bonding”